The Presidential election:who should you vote for? 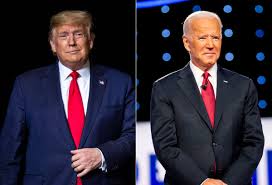 The relevant candidates for the election are Joe Biden for the Democrats and Donald Trump for the Republicans. Let’s get this out of the way, yes your vote does matter a little. Even with the electoral college you can influence your representatives to vote for the one you support. There is just one question; are either good options?

Joe Biden was the Delaware Senator for 36 years and Vice President for 8 years under Obama. He wants to invest in green energy, restore relations with allies(mainly NATO, especially after Trump), possibly make a coalition of other democracies to make China accountable for its trade environment practices, rejoin the global climate accord to fight climate change, expand Obamacare for at least 97% of Americans, undo Trump´s immigration policies, raise the minimum wage, support minorities through reforms and grants, implement universal preschool for all families, expand free college, and institute a new tracking system for COVID-19 plus add additional testing facilities in every state.

Many people have concerns about Biden’s health. Let us look at Dr.Kevin O´Connor, Biden Physician for answers. O’Connor states that Biden is ¨fit to successfully execute the duties of the Presidency to include those of Chief Executive, Head of State, and Commander in Chief.¨ There has been no notable change in his medical history from the time he was Vice President. Biden apparently makes it a point to not smoke, not drink, and work out ¨at least five days a week¨ He also states that he has no mental deficiencies as his ¨cranial nerves and vestibular function are normal.¨ He also had his gallbladder removed and has been preemptively treated for non-cancerous polyps and skin abrasions. So, it is safe to assume that he is at least in good health. Some have suggested that Russia and/or Trump are spreading this narrative to help in his campaign.

Donald Trump is a Businessman and has been President for 4 years. He wants to protect US manufacturing, he wants to assert American sovereignty, end the reliance on China for goods, terminate the Affordable Care Act, build a wall along the Mexican border, curb immigration, bring down drug prices, removing many restrictions on drilling and carbon emissions, make a database to trace police misbehaviour, defend the Second Amendment, and focus on bringing back the pandemic-battered economy.

Donald Trump has been accused of many things like being in cahoots with Russia to win the 2016 election. One more recent accusation was by 26 women who accuse Trump of sexual misconduct since the 70s brought back to attention due the #MeToo movement. Due to the nature of this and this being a school paper, I will not go any deeper with this. Trump has accused the women of being liars, and it is difficult to ascertain the truth.

I hope this clears up at least some of the issues surrounding the candidates for you. Election day is November 3, so don’t forget to vote and have your voice be heard.