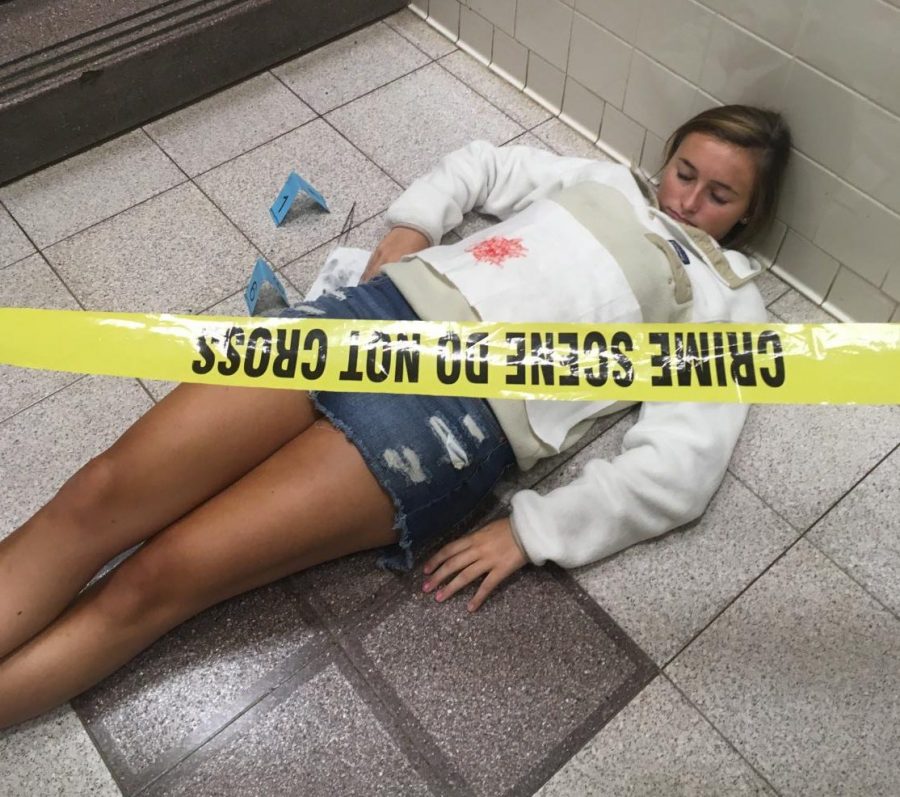 Forensic Science is a thrilling crime solving class for students that are interested in solving crimes and the science in doing it. This class teaches how to collect hair evidence, which is qualified under trace evidence. Hair evidence should always be taken when a violent crime is committed.

Students are also taught to use tape on the floor of a crime scene in order to secure trace evidence. This class is interactive, students can re-enact crime scenes and even create crime scenes in order to have the opportunity to collect evidence and record the scene. They must photograph all evidence before removing it.

This class is run by Donna Hashemzadeh. Hashemzadah is a science teacher. Apart from Forensic Science she also teaches Algebra Based Physics, AP Chemistry, and Honors Chemistry.

Students Bella Dimarzio, Jenna Schlessinger, and Harris Thompson investigated a crimescene at the foot of the main staircase. In this crime scene enactment, Jenna Schlessinger had been pushed off of the banister of the main staircase. This demonstration allowed them to practice collecting hair evidence and using tape on the floor. The investigator had to use latex gloves in order to avoid getting their fingerprints on any part of the crime scene.

In another crime scene investigation, Kaleigh Gammons and Daniel Cunningham investigated the murder of Kendall Haggerty. During this enactment, she had taken a knife to her stomach because she “didn’t vote for Sophia.” They used papers with numbers to label different areas of the crime scene. To collect evidence, they used paper bags to place the evidence in. Haggerty’s stabber, in this scene, was Gammons.

This class is very useful for future FBI workers in the Forensic Science Communications unit. This class teaches students about how to collect evidence, likely transfers of evidence, and how to conduct crime scene investigations. Students are taught about keeping evidence logs, photographing all evidencing before removal, what category evidence can be classified into, and how evidence can be transferred. They also learn about real life crime scenes and how they took place.

Forensic Science has been offered for four years. In order to take this class students must first complete Biology and Chemistry. This class incorporates physics and biology and teaches students the basics of Forensic Investigation. It uses Crime Scene Processing, Physical and Pattern Evidence, Biological Evidence, and Chemical and Material evidence. They also examine case studies related to the concept being taught.