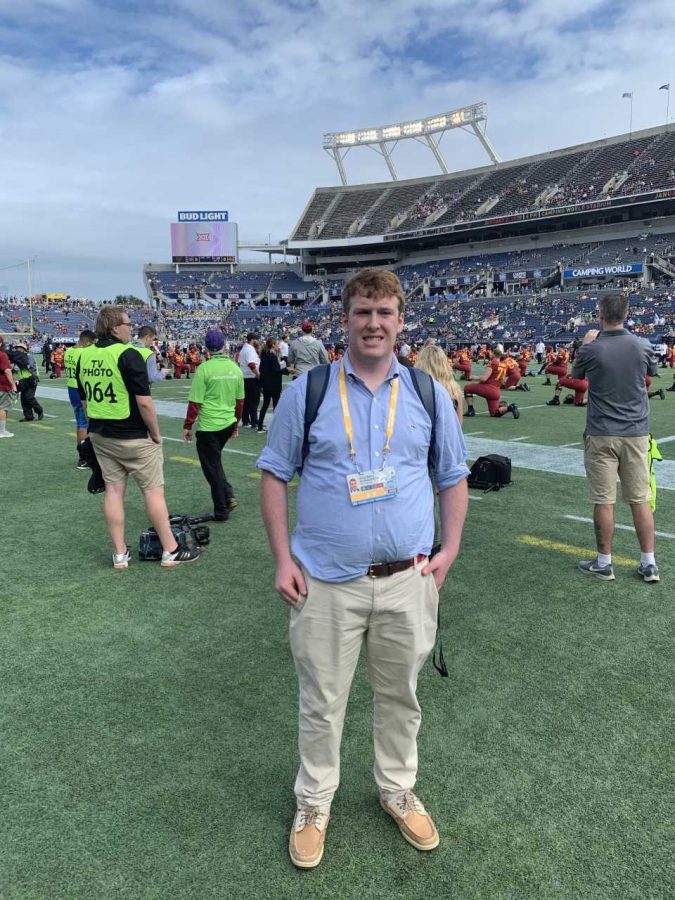 On December 20th, I emailed Sam Gardner of Florida Citrus Sports asking for a media credential for the Citrus Bowl Game in Orlando, FL. He responded almost immediately. While he couldn’t give me a credential for that game, he offered me one for the Camping World Bowl, which would be held the Saturday before the Citrus Bowl. I immediately accepted the offer and booked a flight.

Saturday started at 4 am as I embarked on my trip to Orlando. The flight down was around two hours and I made it to the Camping World Stadium around 10 am. After getting my media credential, I entered the stadium through the media entrance. I looked around trying to get a feel for the layout of the stadium. I made my way up to the press box, where I got to meet Sam Gardner and a local reporter named Jon Alba. Alba showed me around and gave me tips on how to grow my brand. We went down to the field, where I was able to walk around, and he showed me some methods on how to take videos and photos to use on social media. He also introduced me to some fellow media members.

We watched the teams go through their team stretches and warm-ups. We went to the media dining area where they were serving some breakfast- eggs, grits, bacon, and sausage. As we made our way back up to the press box, it was game time.

Notre Dame quickly took control and by halftime, they were up 20-6. During halftime, the Florida Citrus Sports group provided Chick-fil-A sandwiches for the media personnel. With about 5 minutes left in the game, I put in my ballot for the game’s MVP and went back down to the field. I was able to watch the last bit of the game on the field and saw Notre Dame’s celebration.

After the game, I headed to the press conference room where Iowa State’s coach Matt Campbell and wide receiver Deshaunte Jones were about the get started. Campbell was proud of the way his team played this season, but wished they could execute the game plan better that game. Soon we all heard music from a locker room, which meant Notre Dame was arriving soon. They brought head coach Brian Kelly, wide receiver Chase Claypool, and defensive end Khalid Kareem to the post-game press conference. They all seemed very pleased with the season and the game. Once both press conferences were finished, I went back up to the press box and worked on the wrap-up article that has been previously posted on the Hawkeye.

I took the media shuttle to downtown Orlando to attend a watch party for the Peach Bowl: LSU vs. Oklahoma. When I arrived around halftime, LSU was already winning by 28 points, so we all knew who had this game in hand. Back at the airport, I finished up the article and caught my flight back to Maryland.

Overall, it was a phenomenal experience. I would like to say thank you to the Florida Citrus Sports and Sam Gardner for helping set this all up and to Jon Alba for helping me around the stadium.